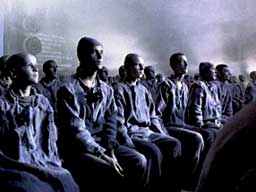 Today Apple leaked/revealed its much(?) anticipated iPhone 5 and no doubt it will be a great success. Many people have already bought it in their minds. It could receive terrible reviews and still smash sales records.

Naturally, tech sites like Engadget are creaming over Apple’s most recent mobile device. And sure, the CPU will be faster, the screen brighter (and bigger), and the brushed metal even more sensually tactile. It will be thinner and lighter. But just by a bit. Apple doesn’t want you robbing the cradle in one full swoop. It wants you to walk out on your loved one for a younger model … but leave room for something even better down the short road.

The most interesting yet unsurprising feature of the iPhone 5 is the new Dock Connector. They’ve “upgraded” it to be smaller so naturally it won’t be compatible with any of your other iDevices. And you won’t be able to borrow your friend’s charger unless, of course, they’re an “early adopter” like yourself. To eschew the industry standard Micro USB connector is one thing (well, Apple’s thing), but to make it incompatible with your own devices is a new level of fucking your customers even by Apple standards. Steve Jobs would be damn proud.

The iPhone 5 will no doubt sell like… iPhones. However, as everything is about convergence nowadays, Apple’s continued inward thinking will be their downfall. In 2010, I bet a friend a thousand dollars that by January 1st, 2020 Apple’s market cap would be half of what it was that day. With so many other Android options out there and Windows 8 right around the corner, I’m wondering what a thousand bucks will buy in eight years. Probably a lot of Apple stock.