When I first purchased the
Android app A Better Camera over a year ago, it was in fact a better camera. Even though they double charged when I purchased a single feature upgrade followed seconds later by the All Features upgrade, it was still better than the stock camera. However, that changed within a couple months.

First the panorama feature ceased to work, always horribly blurring the final frame. They had the requisite update of “bug fixes”. It didn’t improve. In fact, it got worse. The app then started to get very laggy. More bug fixes. More lagginess. Until eventually the app didn’t open at all. And I had to look for another camera app. 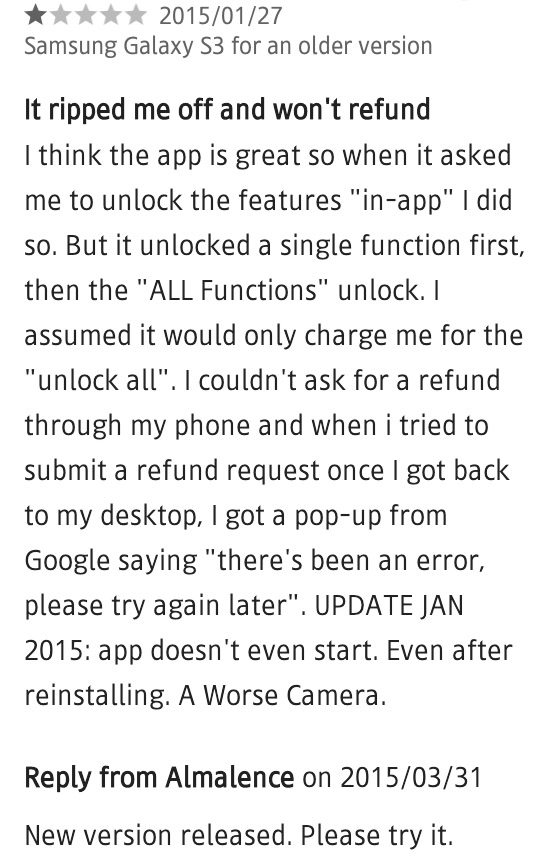 I posted a one-star rating to which the developer replied suggesting I try the more version. They made no mention of the money they stole from me. Regardless of the amount, it’s the principal.

It seems they, like most app developers, are like bad plastic surgery victims. Who keep trying to fix something that was once beautiful. And they will never get it right. They keep trying to fix with more mistakes. And the world is left with ugly monsters.

The final straw came today when I daringly opened this latest version. It asked me to install their new resource sucking widget, which I did not want to do. They then gave me the option to A. install it or B. be reminded later. How about C. Fuck off, I never want to install your widget so don’t ask me again. In this PAID APP.

The developer should enrol in an Intro To User Experience course at his local community college. 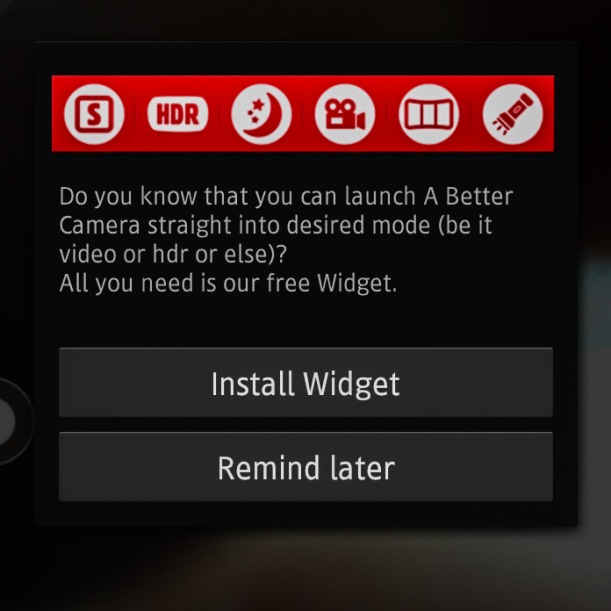 With risk of looking like a prick to Customer Service workers everywhere, I feel this incident makes a nice follow-up to this morning’s earlier post. I recently signed up for a free trial of Base CRM’s Professional service plan, which is $45/month. Because they have (what has become a business standard) an “Opt-out” free trial, I determined the cancel-by date and marked down the day before on my calendar. It is something I always do (and something everyone should make standard practice) lest I find myself paying again for a year of e-greetings I don’t really want.

Well, my two week came and went and I didn’t really get to use Base CRM as much as I had wanted to. So when I went to cancel my trial the site recommended I downgrade to the $15/month plan for a two-week trial. I figured Why Not? So I cancelled my $45 subscription a day in advance of its automatic billing date and signed up for two weeks of the $15 plan.

The next day I received an email from Base CRM stating they had billed me $45 for my new Professional Plan. Still in the aggravated midst of getting shafted by Synology I immediately replied with the following email:

I had tried to be as pleasant as possible in my angered state… the whole “catch more bees with honey” thing and all. After pressing SEND, I had a moment of worry as I ran through last month’s sign-up process in my head. Like a murderer going over the crime scene, hoping he didn’t make a mistake. I realized I hadn’t taken a screenshot of my registration page (something I also try to do when signing of for Free Trials). Still, I was ready to go battle. It’s not about the $45. It’s about the principle. I’d do the same for 45¢. I received an email reply from Victor at Base CRM within the day:

I was taken aback, horrified almost. Was I on Hidden Webcam? With slight trepidation I decided to continue my trial. And thank Victor for not going to war.

Victor agreed. It’s not about the $45. He also followed up with a detailed, non-scripted, non-boiler plate reply to explain what had happened.

It is so nice (yet sadly uncommon) to encounter a business nowadays who does not treat their customer like the enemy.

It also helps that Base CRM makes a great product that lives up to its marketing.

I just bought Bob Mould’s new album Silver Age from Amazon.com (US store), my first solely digital music purchase ever. I had listened to it a few times on Grooveshark and knew I liked it so it was a no-brainer. Especially at five bucks. (Which, incidentally, is what an album should cost.) I bought it through my Amazon US account for a few reasons: 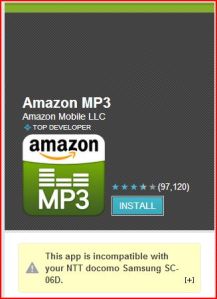 In Amazon, The Cloud has borders

1. I have a Kindle Fire and it only connects to the US store (thanks Amazon!).
2. The US store has a cloud player where I can keep my music and stream it on my devices.
3. Fuck Apple.

After purchase, it was immediately available for me to download or to stream through the Amazon Cloud Player built into the Amazon site. It was also immediately available in the same ways on my Kindle Fire as its music player has a native cloud player. Brilliant. All very simple, friendly and handy. Until I stepped outside the narrow bounds of digital “ownership”.

My Kindle Fire, of course, was purchased in the US as I Am Canadian and living in Japan. As such, all my digital purchases must be made through my American Amazon account. This requires me to consider currency exchange rates which is naturally something I’d prefer to avoid. But so be it, the banks have got to make money somehow (or everyhow). But that is not what annoyed me here. What pissed me off with this purchase was that when I went to listen to it on my Samsung Galaxy S3 (Japan Edition) I discovered the Amazon Cloud Player is not available for this device. Because… I am in Japan and The Cloud is… not really “the cloud” as perpetuated by all these cloud companies. Granted, it is not a huge hurdle for me to listen to my purchase on my Galaxy. I simply need to download the MP3s of the album and transfer them to my phone. But that is not the point.

The Cloud: Your data. Anyplace. Anytime. (Available with internet connection only. Some restrictions apply, including international boundaries, model of phone, model of PC, model of portable media player, model of economics, model of particle physics, country of purchase, country of residence, bandwidth restrictions, whims of the artist, whims of the capitalist, and/or whims of the pirate. Some charges may be incurred depending on service provider, location, time of day, weather, and genre.)

In a time when Newsweek has just announced that it is shedding it’s dry, paper skin and going purely digital next year, the move from hardcopy to softcopy is but a foregone conclusion for most. After all, dead tree media received its unflattering sobriquet for a reason. However, traditional industry thinkers have been scrambling about for the past 15 years wondering how they are going to charge people for their product if it’s not something tangible you could use to squash a bug. And they think Digital Rights Management (DRM) is the answer. It is not. All DRM does is piss off the people who are paying for their product. If The Pirates had to devise a scheme in which they could convince everyone to eschew paying for content and download their free stuff instead, they could not come up with something better than DRM.

Other content companies could learn something from Comedy Central. While watching The Daily Show (legally, online, for free, in Japan) I was inundated with MTV ads featuring American pop duo Karmin. As I am not a huge fan of such pop music I complained about the annoying ads to a friend of mine. She’d never heard of them before. Later, she searched for them online. Then heard their music. And bought their album. In Japan. Because of an ad from America viewed online in Japan by a Canadian who didn’t even like it.

To be continued in Part Two.

I have been using the shoe company’s Nike+ Android app for about two weeks now to keep track of my physiotherapy progress. It’s basically a pedometer that allows you to record your runs with some added touches such as:

There is also a music option built into the app that allows you to to “Shuffle Library” or choose a “Playlist”. I have not yet been able to either create a playlist or load an existing playlist. There is also the option to “Select a PowerSong” which I have done, but I have not been able to figure out how to play it. The music player component of this app needs some definite attention as it is currently failing.

The app also integrates with your online Nike+ account and you are awarded “NikeFuel” for each activity. Exactly what is NikeFuel? According to Nike, it is “the ultimate measure of your athletic life“. I thought it was going to lead to earning points for purchasing Nike gear, but no, it is just a marketing gimmick. And a poor one at that. I’m sure a lot of people think that NikeFuel is similar to AirMiles and feel let down when they find out it more like Apple’s imaginary “Retina Display”. It would have been better for Nike to just leave out the NikeFuel. Nothing worse than making your customers feel scammed when they’re not even being scammed. 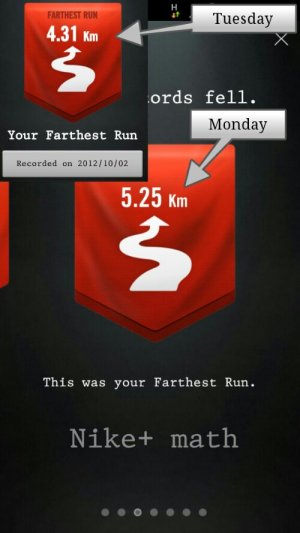 If this app review is Anthony’s attempt at sarcasm, he has failed. I was quite confused by the title, the five-star rating and then the review itself. Anthony, if you are out there, please let me know what the hell you’re saying here. 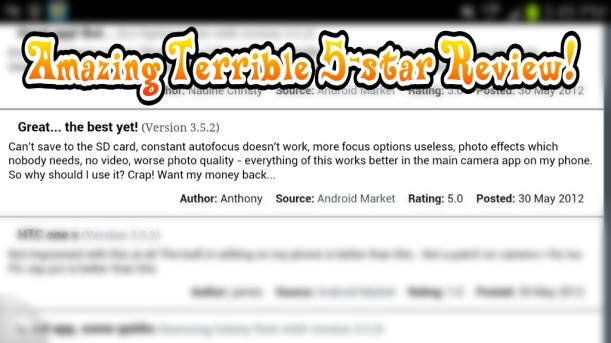