I was meandering through Shinjuku’s massive Yodobashi Camera complex yesterday and obviously could not avoid the fifty million posters, signs and other various adverts informing me that Windows 8 is to be released this Friday (October 26, 2012). I have actually been looking forward to it as I am a “Windows Person”. I don’t like Macs and never will. And I’ve never had much interest in Ubuntu or any other OS my techie friends tell me is “kind of like Windows but a billion mega-times better because Linux fucking rules.”

I’ve also had Vista for the past three years, three months and 15 days. And yes, it feels like I’m confiding a disease when I write that. It was the early days of Summer 2009, I was in desperate need for a new laptop, and could not put off the purchase the few months required to wait for Windows 7. To make matters worse, the laptop I ended up buying was an HP Pavilion dv7. I had no idea that “HP” was an acronym for “Hot Plate”, but that’s what I get for not doing enough pre-purchase research. It’s my fault and has nothing to do with HP selling me a piece of shit. So, here I find myself again, three years down the road, looking for a new PC. However, through a lot of time, personal effort and anguish on my part, I’ve managed to keep the Hot Plate running and can wait for the stable retail release of Windows 8 before I buy my next disappointment.

Hearing that Windows 8 is a brand new operating system, built on some kind of Super Kernel for all platforms – desktop, tablet, smartphone, etc. – I must admit I’ve waited with slight-to-mild anticipation for its release. I was therefore pleased to see that Yodobashi had a version installed on the floor model of a touchscreen laptop, even if it was in Japanese. I gave it a touch here and gave it a touch there and then I looked for the button to touch to Go Back. I could not find it but I kept my cool (in spite of being mildly OCD when it comes to UI) and asked a nearby staff how to go back a screen. She then pointed to the button. On the fucking keyboard. Replete with a sticker pointing to it. And I felt all the hope I had for this OS and for Microsoft go out of me like air out of a whoopee cushion. I hope this was just due to the staffer not knowing anything about Win 8. If not, where can I download Ubuntu?

This weekend I decided to tackle a problem I’d been having for quite some time. As I have an HP Pavilion laptop (DV7) that problem was obviously one of overheating. It could only run a game for about 30 minutes before its temperature sensor flicked the kill switch. As I don’t do much gaming this was never a major concern (until I found myself bored stiff in a hospital bed). However, recently movies have been burning it up and it can’t play NFL Gamepass with any worthy quality. So it finally became time to deal with the problem.

I’d been avoiding the task because HP hates its customers. That’s the only reason I can think of for them designing their laptops the way they do. I found out post-purchase that the Pavilion laptop is notorious for overheating. And it took me about a year to discover that. The fan is located in the rear corner of the laptop with vents on the back and bottom. These vents are conduits for dust and lint and all the crap in the air that wants to snuggle up in the heat of its CPU. All this unwanted stuff clogs the fan and the heat sink, and rather than having a little latched door at the back of the laptop to allow for easy cleaning, HP requires a near-total disassembly of the laptop in order to perform what should be a simple task. My Pavilion DV7 required the removal of the top casing, the screen, the keyboard, the hard drive, the motherboard and 61 screws to remove a clump of dust.

Some conspiracy lovers say that HP does this to keep the computer shops in business. I don’t think HP is so altruistic to their retail partners. I think it’s much more likely they keep it in family and do it to sell warranties and give their laptops a shorter lifespan.

After three hours of screwing and unscrewing and ensuring I didn’t strip or lose any screws I finally managed to clean my laptop. The core temperature which used to be an astounding 90-101 degrees Celsius is now running at 47-65 degrees Celsius. I can watch HD movies and NFL Gamepass again but the damage is done. It doesn’t run as fast as it did before and the overheating is likely responsible for the all-dead-all-the-time battery. Well, Windows 8 will be out in a month and time to buy something new anyway. I got recommended the HP TouchSmart but it seems to have overheating problems as well. So with HP and Toshiba on my blacklist it looks like it’s time to check out Acer. Regardless, next time around I’ll be sure to hit my fans with compressed air once a week. 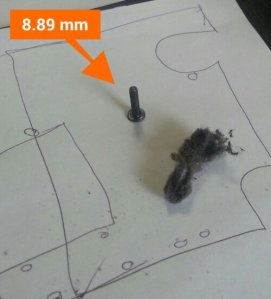